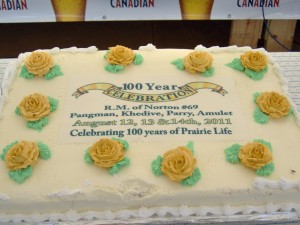 It was great to see all those who came back for the 100 Year Celebration. We had visitors from across Canada as well as from the United States. Special visitors were the Pangman’s from Texas.

The 100 Year Committee would like to thank all the volunteers that helped to make this celebration a success. Also a big thank you to our Corporate Sponsors:

Set up of the tents at the school yard began on Tuesday, august 9th.

Registration began on Friday afternoon at 1:00 pm at the School Gym.

During the afternoon there was a tour at the Deep South Personal Care Home. The Concession Tent was open where  you could get burgers, hot dogs, drinks etc

The Beer Gardens opened at 3:00 pm on Friday and Saturday.

For the children a movie night was held at the Bethel Mission Church at 8:00 pm.

At 9:30 pm the Cabaret started with Third Degree Burnz and included a Midnight Lunch.

Saturday morning began with a Country Breakfast which was sponsored by E. Bourassa & Sons. The Farmer’s Market was held on main street from 9 am to noon.

Then the Parade began at noon. The Parade had many floats, old cars, newer cars, horses and more.

The Opening Ceremonies were held at the school following the Parade. The special guests at the Opening Ceremonies were: Lieutenant Governor Gordon Barnhart, The Honorable Dustin Duncan MLA, Ed Komarnicki MP and Tracy Mann, Executive Director of the Community Initiatives Fund, as well as Mayor Rod Rowland and Reeve Chuck Jacques.  Reeve Chuck Jacques presented Century Farm awards to those families who have farmed in the area for 100 years. Also, the oldest seniors in our community were honoured.

After the Opening Ceremonies their was a Day Care Tour, Children’s Activities at Bethel Mission Church and the 1996 Time Capsule was opened at the Pangman Library and more old time music.  Their was a ribbon cutting ceremony to officially open the Community Kitchen, followed by the Community Supper.

After supper the winner of the Pangman Princess contest, Christie Jesse, was crowned. Congratualtions to all the Princesses for all the money they raised. Also the prizes were drawn for, one night stay at the Temple Gardens Mineral Spa, 2 tickets to ride on the Southern Prairie Railway Train and Gift Basket from Gift Bundles by Allison.

Fur Eel performed at 7:00 pm and the Beer Gardens were open until 12 am.

Sunday morning was the Community Church Service followed by the Sunday Bunch.

Later in the afternoon was the Annual Heritage Picnic at Amulet site with a pot luck meal.

We hope everyone had a great time at our 100 Year Celebration.